Scenes from an Expedition

Most of the pictures shown here were made on expeditions during the years 1983–1997, and were taken by Dr. Klaus-Dieter Mathes, Dr. Christoph Cüppers, Dr. Franz-Karl Ehrhard, Dr. Alexander von Rospatt and Dr. Jan-Ulrich Sobisch. 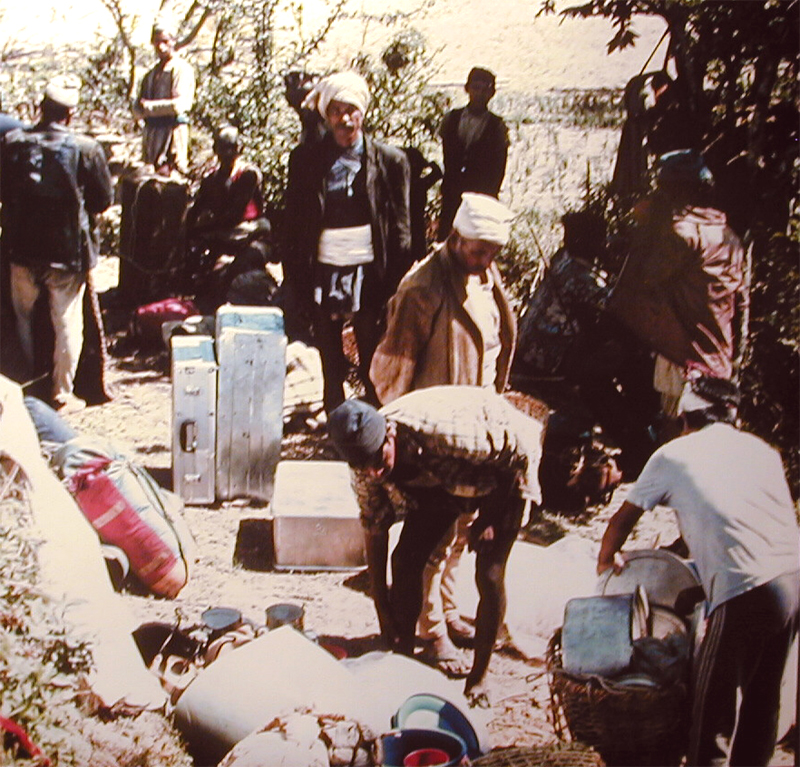 The photo equipment, trekking supplies, and provisions for several weeks are carried by hired porters in 30-40 kg loads to the source destination. Because different items are used each day, the packs have to be re-assembled every morning. 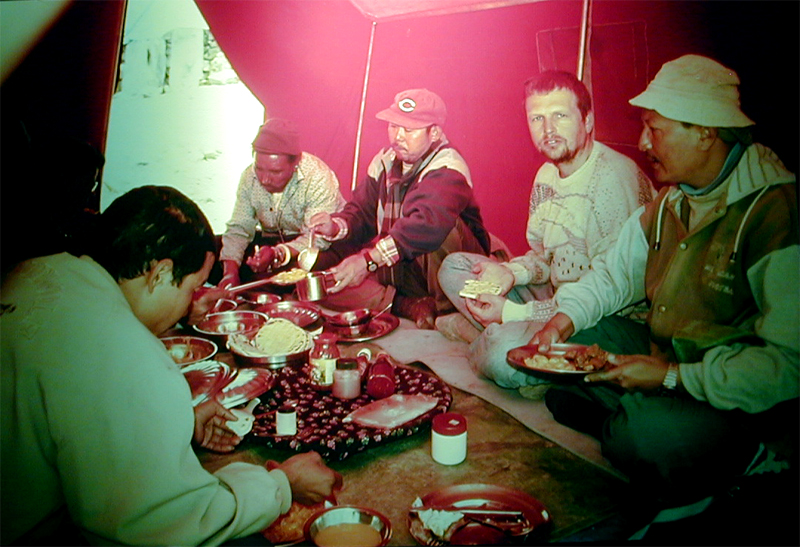 The expedition team enjoys a warm meal. Right to left: Navraj Gurung, technician and photographer, Dr. Klaus-Dieter Mathes, Tibetologist and expedition leader, Pema Jigme, the Tibetan assistant and Tsewang, the guide. Left front: The Liaison Officer of the National Archives, who has been appointed by the Nepalese government to accompany the team into Upper Dolpo.

Thame monastery at the base of Teng Kangboche in the Everest area. The monastery's spiritual head, Thame Rinpoche, lives here with twenty of his monks. The expedition received permission from Thame Rinpoche to catalogue and film his personal library, and once the work had begun, the monks began to bring their texts for microfilming. 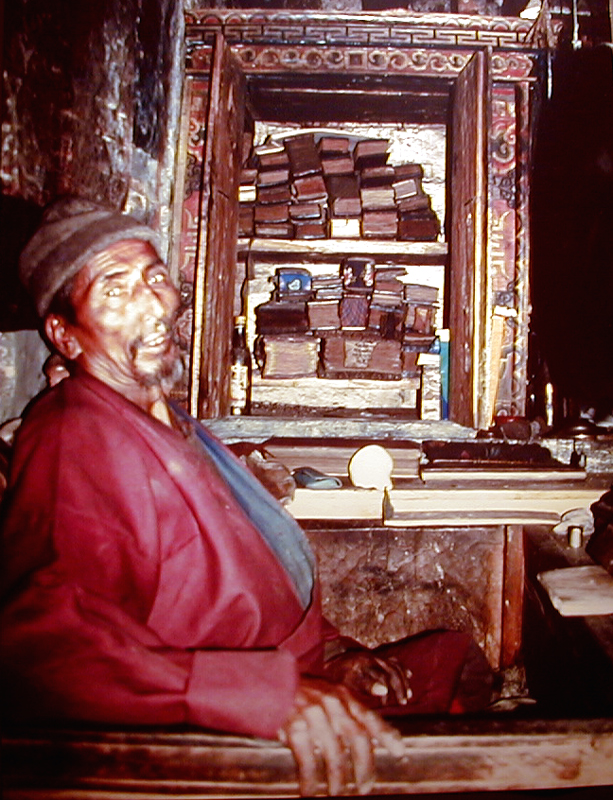 A Bon-lama in front of his library. The early form of the Bon religion brought together elements from the indigenous religion of Tibet and elements from Buddhism as transmitted via Central Asia. Bon developed alongside the Buddhist religion in Tibet and bears many similarities with Buddhism. 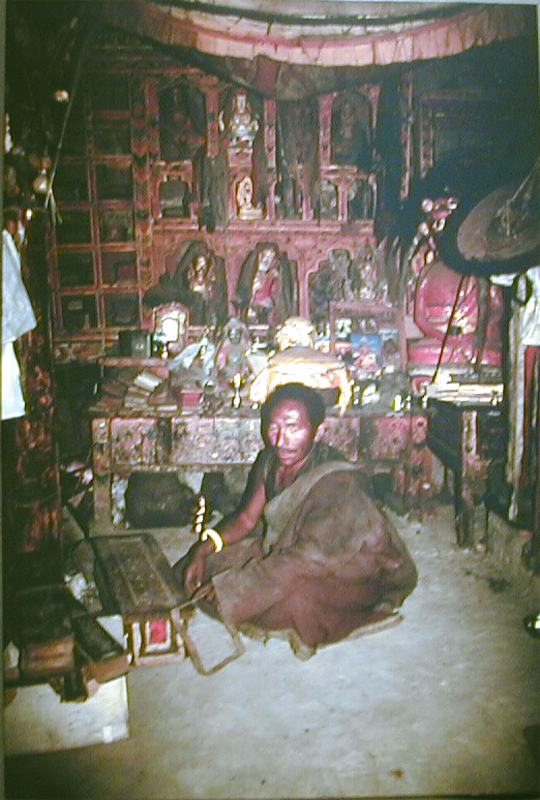 A Lama from Karang (Dolpo) in his home before his altar and texts. A few days after he and the leader of the expedition met and arranged for the filming of his manuscripts, the Lama sent his son with the texts to the NGMPP microfilm station in Do Tarap. 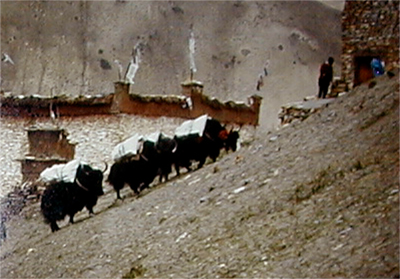 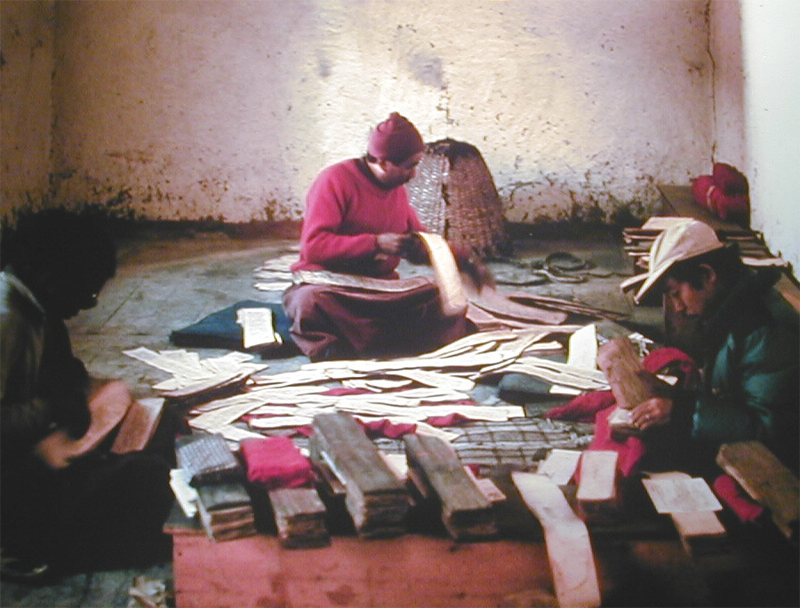 The manuscripts are prepared for filming. Our Tibetan assistant, together with three others from the team, sorts through the valuable manuscripts and block-prints. The collection in this monastery near Jomsom was very unorganized when the team arrived, primarily because the monks had been forced to hastily re-locate the collection on a number of occasions when it was threatened by mice and by rain dripping through leaky roofs. It took several days of sorting through the texts to get the majority of the collection ready for filming. 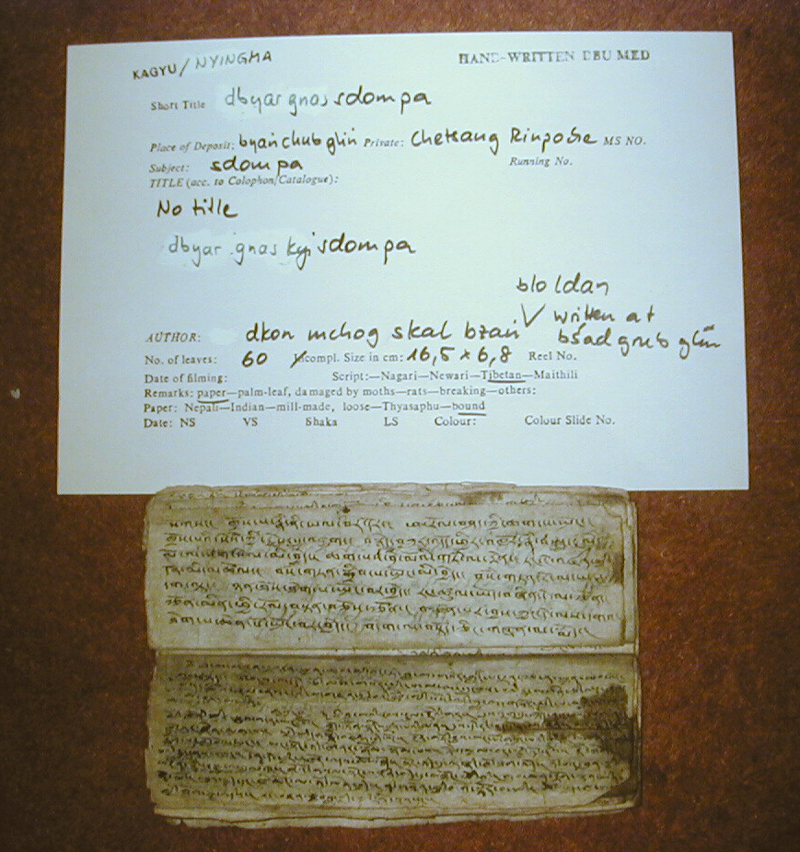 Manuscripts and their respective catalogue cards. Prior to filming, the title of the text, the author's name, the date the manuscript was written, and the text genre are recorded. It is, however, often difficult to determine the title, etc., if the text is incomplete or if the colophons-the sentences or paragraphs containing the general information about the text-are missing or illegible. The size of the manuscript, the material it was written on (palm-leaf, various types of paper), the script employed, and other data are recorded on the lower part of the catalogue card. At the time of filming, the photographer writes the film reel-number on the catalogue card, and then films the card immediately before he begins the filming of the manuscript itself. 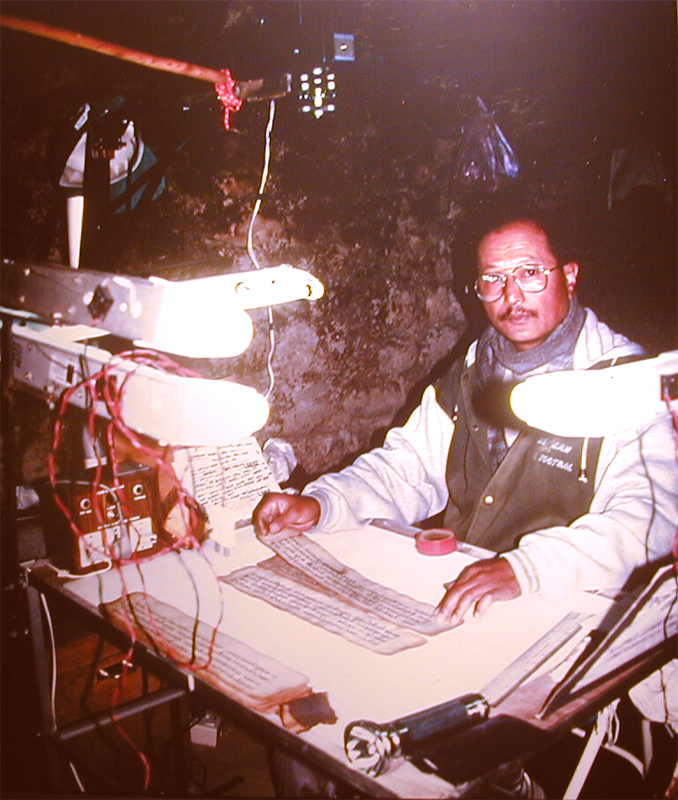 The Project's photographer and technician for many years, Mr. Navraj Gurung. The filming on early expeditions was done by sunlight, to spare the team having to carry a heavy generator on the trips through mountainous terrain. But the varying intensity of sunlight over the course of a day tended to affect film quality, and it was discovered that even the shadow from a small cloud high up in the sky could interfere with the light consistency. To provide for optimal filming conditions, the NGMPP team now takes a generator on all expeditions and films using artificial light. 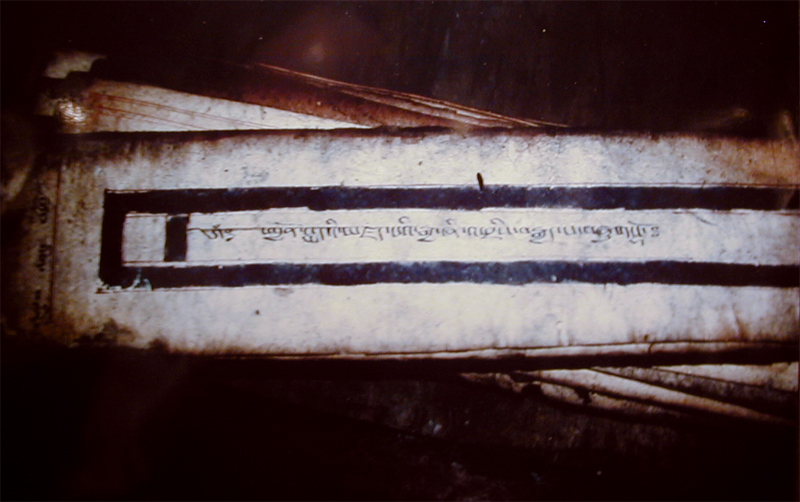 A badly damaged Tibetan ritual text. The text belongs to the Nyingma school of Tibetan Buddhism and reveals four hundred methods for repelling demons. The text is ascribed to Padmasambhava, the great Indian scholar-magician who played an important role in the spread of Buddhism to Tibet in the eighth century. This manuscript was discovered by the NGMPP team in Chame monastery in Manang. 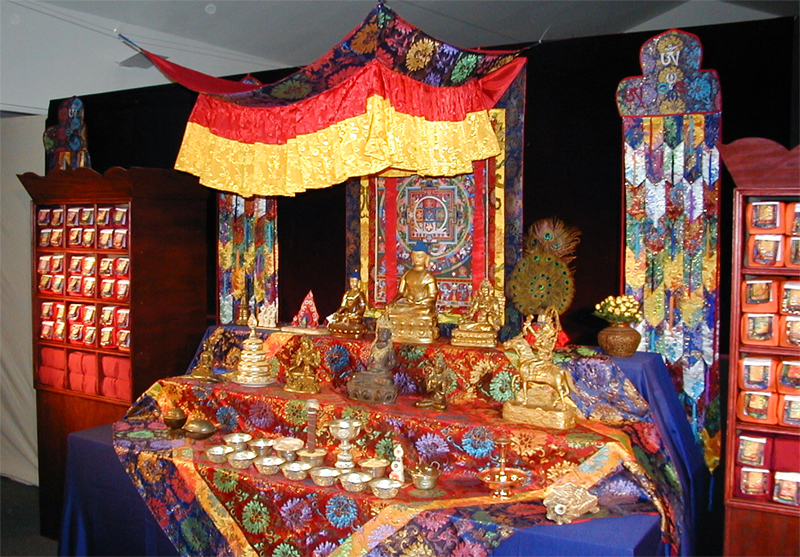 A Tibetan altar was displayed at the exhibition in Hamburg. It aroused considerable interest in the visitors and afforded the chance to discuss the main principles of Himalayan religious culture during guided tours. 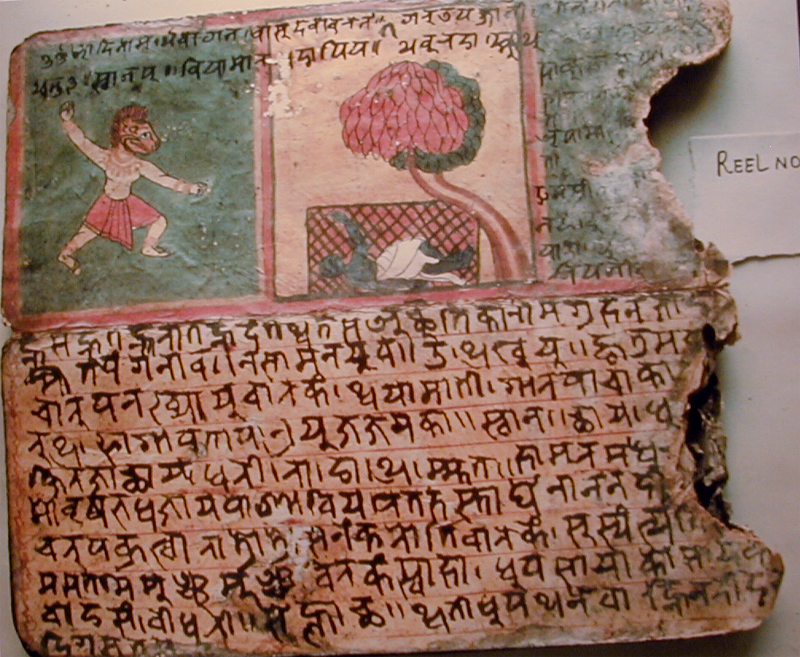 Manuscript of a medical text. This manuscript, titled Mantrauṣadhicikitsā, "Medical Treatment via Mantras and Herbs," has been partly chewed away by rats. The illustration shows Narasiṃha, a manifestation of the god Viṣṇu, and a sick person lying on a bed in the shade of a tree.

A document written in Tibetan and Chinese. The Samling Gompa possesses numerous historical documents, nearly all of which were filmed by the NGMPP in the summer of 1997. Among them are two documents written in both Tibetan and Chinese. In the document shown here, a certain bDa lo yer from Shigatse, on the order of the Chinese Emperor Chia ch'ing (1796–1820), orders the King of Mustang and others to protect the possessions of the Samling, Drolung and Tarap monasteries

One of the display cases in the exhibition was dedicated to Nepalese writing materials. Palm-leaves used for writing and Nepalese handmade paper, which had come into use by the 14th century, are shown, together with pens, manuscript boxes, yellow Haritāla (paper insecticide), etc. The techniques for preparing palm leaves as writing materials are explained. 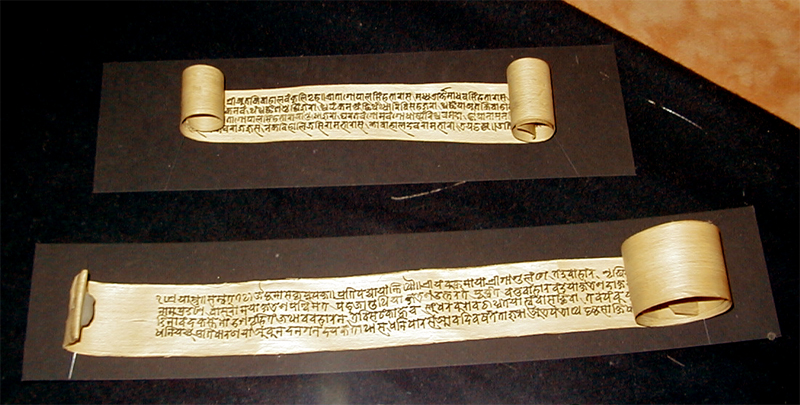 This display case contains two documents written on palm-leaf scrolls. The documents are treaties regarding the sale of a piece of land (1571 and 1528 AD). Script and language: Nevari. 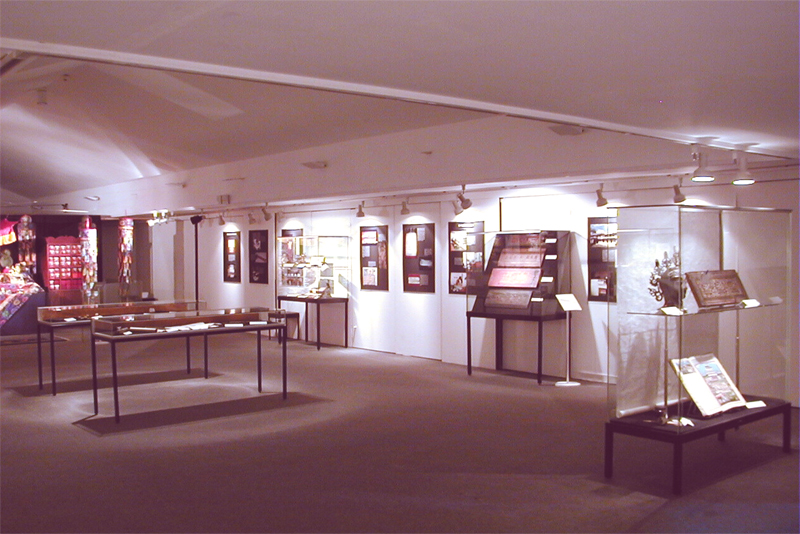 The Hamburg exhibition. Items such as wooden book covers, printing blocks and ritual objects were displayed to convey an idea of the richness of the Himalayan culture.