Collections of Islamic Coins in Germany

Collections of Oriental Coins in Germany 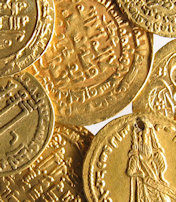 Islamic coins are designed to be objects of art but at the same time they are textual documents with political and religious formulae. Their design is influenced by a wholly different set of conditions which plays no role in the design of other objects of Islamic art: the currency system, their legal validity according to Islamic law, conservative cultural expectations towards the design of money which influenced their acceptance, the respective technical procedures of a mass product, manufactured on the principle of the division of labour, the political message as well as the administrative structures which lay behind all these factors. Classical Islamic law saw gold and silver coins as absolute equivalents, meaning legal money. Copper coins were only money under certain conditions. They had a different, variously defined, juridical position in the currency systems as tokens. This special status allowed for greater freedom in the design of copper coins than was permitted with precious metal coins.

Islamic coins are characterised above all as the bearers of texts of up to 150 words. The inscriptions on the coins struck during the first six and a half centuries of Islam - a period for which we have, with few exceptions, no other primary historical documents - often mention from three to five names, providing the names and titles of the whole hierarchy of power - from the local governor up to the caliph. They usually state the town where the coin was minted, sometimes more precisely the quarter, then the year of minting, sometimes even noting the month and the day. Religious legends give hints of the political orientation of the ruler. In Islamic history the inclusion of the name of the ruler in the coin protocol and in the Friday prayers served as proof that he actually ruled. They had an identical juridical and political value. Mention in the Friday prayers, however, was purely verbal, on coins the protocol can be found permanently stored on a metal object that was frequently reproduced. Islamic copper coins could also offer a wealth of images of mythical creatures, humans, flora and fauna which are still not fully understood.

The Period of the Theology of the Enlightenment

After a centuries of mere curiosity on Oriental coins appearing in collections from the time of the renaissance, Islamic numismatics started as an offspring of theology in the eighteenth century. In 1724, the orientalist Georg Jacob Kehr (1692 - 1740) from Leipzig wrote the first monograph on Islamic numismatics which described a hoard of Islamic coins found near Gdansk. Richard Ettinghausen regarded this monograph as marking the beginning of Islamic archaeology (Ettinghausen, R.: Islamic Art and Archeology. In: T. Cuyler Young (ed.): Near Eastern Culture and Society, Princeton 1951, 17-47, esp. 21). By the end of the 18th century, in the period of the theology of the Enlightenment, a scientific discourse had come into being in Germany conducted by Protestant theologians who were both interested in historical matters and able to read Arabic. Their interest was often initially aroused by Islamic coins found in their native regions, usually around the Baltic Sea. These dated mainly from the tenth century, a period when the Vikings had established trade contacts with the core lands of the Islamic empire and then with Central Asia.

The first specialised collections were also formed in the time of the theology of the Enlightenment. In 1794, the theologian and orientalist Oluf Gerhard Tychsen (1734 - 1815) of Rostock published his Introductio in rem numariam muhammedanorum, the first scholarly manual of Islamic numismatics. Tychsen's collection is still part of the university collection in Rostock. His colleague in Göttingen, Thomas Christian Tychsen (1758 - 1834), was able to build up the Oriental holdings of the university collections with the assistance of generous patrons, in particular alumni living in imperial Russia.

The Era of Philology of Oriental Languages

In Germany, the second and third decades of the nineteenth century saw a new kind of Oriental scholarship emerge, emancipating itself from theological studies. A generation of young scholars fostered this change. Most had studied at the École speciale de langues orientales vivantes in Paris with Antoine Isaac Silvestre de Sacy (1758 - 1838). He established Oriental studies as the philology of Oriental languages and liberated these studies from their previous spiritual and institutional dependence on theology. From now on, the major task of Oriental philology was seen as the collection of textual sources of all kinds, not only manuscripts, but also papyri, inscriptions and coins. Many of the students of Silvestre de Sacy included numismatic studies among their publications.

In 1840 one of his students, Johann Gustav Stickel (1805 - 1896), was able to found the Grand-Ducal Oriental Coin Cabinet in Jena with the financial support of the Grand-Ducal house in Weimar. He served as its director and as Professor for Near Eastern Languages in Jena up to his death. At this time, the Grand-Ducal Oriental Coin Cabinet was the only specialised research institution of its kind. The eighteen forties and fifties in Germany saw the climax of academic research on numismatic sources within the scope of Oriental studies, measured by the number of authors and articles appearing in the Zeitschrift der Deutschen Morgenländischen Gesellschaft, the monographs published and the private collections formed.

In the eighteen sixties and the seventies Islamic numismatics stagnated and interest in the field began to decrease as the generation of students of Silvestre de Sacy in Germany were replaced by younger scholars. From the sixties onwards the collections formed by the older generation of orientalists entered universities and public coin cabinets. For example, in 1866 the collection of Frédéric Soret (1795 - 1865) came to Jena, in 1867 the collection of Ernst Meier (1811 - 1866) to the University of Tübingen, in 1873 - after detours - the collection of Otto Blau (1826 - 1879) to the university library in Leipzig, in 1888 that of Heinrich Leberecht Fleischer (1801 - 1888) to the library of the Deutsche Morgenländische Gesellschaft in Halle.

In 1877 the collection of the British officer Seton Guthrie of about 15,000 specimens was the new starting point for the development of the Oriental holdings in the Royal Coin Cabinet in Berlin. The young orientalist Adolph Erman (1854 - 1937) was hired for this task. He was the first who invented the ordering of a collection according to mint and dates instead of the order by dynasties, but for him the coin cabinet was only one stop in his career to a professorship of Egyptology, which he obtained in 1883. In spite of the considerably enlarged material base, Islamic numismatics in Germany did not make a new start. In 1896 with the death of Johann Gustav Stickel, studies on Oriental coins at German universities came to an end for nearly a century. Erman's successor in Berlin, Stickel's student Heinrich Nützel (1863 - 1934), ceased publishing after the First World War. This was also the end of Oriental numismatics in public coin collections for the time being.

Oriental Collections Between Philology and Numismatics

Since the middle of the nineteenth century the humanities had diversified more and more, to the disadvantage of the Islamic numismatics. On the numismatic side the linguistic competence to put the information into its proper historical context was absent and knowledge of numismatic methods was lacking on the part of orientalists. Only a few orientalists at the end of the 19th century still worked with numismatic sources.

For this reason attempts to revive Islamic numismatics after the Second World War by numismatic institutions in the former Federal Republic of Germany and the German Democratic Republic failed. In 1949 the acquisition of the above mentioned collection of Frédéric Soret (4,010 specimens) by the Bavarian State Collection in Munich might have allowed a fresh start. Being originally only a loan of the Grand-Ducal house, Soret's collection had been returned to it by the University of Jena in 1939. In 1969 the person in charge for the Oriental collection at Munich, the classical archaeologist and art historian Peter Jaeckel (1914 - 1996), was promoted to be the director of the Army Museum in Ingolstadt. Work on the Oriental part in Munich stopped.

The Revival of Islamic Numismatics in Germany

The revival of Islamic numismatics in Germany as an academic subject came about on the initiative of the Oriental institutes of the universities. Now, due to a new self-definition as an interdisciplinary regional subject, historical Islamic studies were in search of new research tools. In 1990 a research unit for Islamic numismatics was founded at the University of Tübingen. An American private collection of about 30,000 specimens was purchased by the Volkswagen Stiftung as a base. In 1994 the chair of Semitic Philology and Islamic Studies was established at the University of Jena after a vacancy of 75 years. Since then, the former Grand-Ducal Oriental Coin Cabinet has been reconstituted and made available for study. Both collections have since almost doubled in number and quality - Tübingen about 65,000 and Jena about 15,000 coins - in each case with the support of an active circle of private patrons and sponsors. In spite of the renewed importance of Islamic numismatics not only for historical research, but also for art history and archaeology, no other German Islamic coin collections are now curated by an orientalist. Efforts were made, however, by Tübingen and Jena to survey other medium-sized Oriental collections from the 19th century and to make them again accessible for researchers.

The material base of Islamic numismatics has multiplied substantially world wide in the last quarter of the last century. In Germany alone, 135,400 Oriental coins at least are available for study in public collections, including 30,600 Indian coins and in addition at least 24,600 East Asian coins. Today Islamic numismatics is in the position of possessing a rich supply of material evidence from many places and periods of the Islamic world which can be "read" parallel to the historical tradition and be "seen" parallel to the development of Islamic art. Due to the ambivalent nature of coins both being textual documents as well as miniature works of art there is no permanent exhibition of Islamic coins in Germany. As in any archive, the visitor usually has to make an appointment to see the coins on a one to one basis.

The informations are collected from the literature and by direct inquiries at the respective institutions about their Islamic Oriental holdings. Due to the specific organisation of each collection sometimes Indian and East Asian coins are included, sometimes are not. Only where additional informations about East Asian coins were available, these were given as well. The literature is by no means complete, but an introduction into the coin collections and their Oriental holdings.

Cat.: Catalogues of at least a significant part of the Oriental coins within the collections.

Collections with more than 10,000 Oriental coins

-, Münzen der Rasuliden nebst einem Abriss der Geschichte dieser jemenischen Dynastie, Berlin 1891. [most of the coins are from Eduard Glaser (1905 - 1908) acquired during his Yemen expeditions. Eight of these coins entered the Oriental Coin Cabinet in Jena]. Reprint and Translation: Coins of the Rasulids Comprising a Synopsis of the History of that Yemenite Dynasty, Mainz 1987.

Collection of the Deutsche Morgenländische Gesellschaft in Halle

Collections with less than 1,000 Oriental coins

Important Oriental collection which has disappeared

It comprised more than 600 coins until 1934. It included the collection Johann Sigismund von Haunold, Breslau (1634 - 1711), duplicates of the Asiatic Museum, St. Petersburg (bought in 1823; 147 coins), coins from the Orient-expedition of Ulrich Jasper Seetzen (1767 - 1811; about 150 coins), parts of the collection von Sprewitz, Moskau (bought in 1831). The collection disappeared after 1934, without any known record. At least sixty coins of the collection were acquired by the Coin Cabinet in Berlin in 1935 (see above).

Lucke, Rolf-Günther: Geschichte des Münzkabinetts Gotha, unpublished PhD diss., Halle 1968. [a comprehensive history of the collection however without any reference to the lost Oriental part].